September 27, 2013 — A new report by the National Consumer Law Center (NCLC) provides an overview of the Arrearage Management Program (AMP) in Massachusetts, in addition to outlining what issues other states should consider when creating their own programs.

"The Massachusetts experience shows that a carrot, rather than a stick, works much better to capture overdue debt payments and to increase energy security for low-income customers," notes NCLC senior attorney Charlie Harak. "What's more, the AMP incentive program is also enthusiastically endorsed by utility companies and state government."

According to the report, the Massachusetts AMP provides relief for low-income gas and electric utility customers who have significant past-due balances (arrears) on their bills. Each time an AMP participant makes an agreed-upon monthly payment (generally 1/12th of the customer's estimated annual bill) the arrearage is reduced until it is completely eliminated.

NCLC says the AMP "is an important tool to respond to spiraling energy costs," especially when low-income customers get behind and find themselves trying to pay off both current charges and their outstanding balances. AMPs, says NCLC, let low-income families know that service won't be terminated if they make the agreed-upon monthly payments. In illustrating the need, the report says one major electric utility in the state terminated service for about 19,000 accounts between March and September 2012.

As of December 31, 2012, there were about 17,300 gas and electric customers enrolled in the Massachusetts AMP. During 2012, AMP participants made $17.8 million in utility payments and $15.9 million in arrears were forgiven.

Along with a very detailed look at the Massachusetts AMP, the report recognizes that only a few states have such programs. That means best practices are still being developed, but NCLC recommends some issues that AMP creators should consider. These include: instituting automatic enrollment or opt-in for participants; setting income eligibility levels; determining and computing the level monthly payment; and establishing the time period by which an arrearage is paid off. 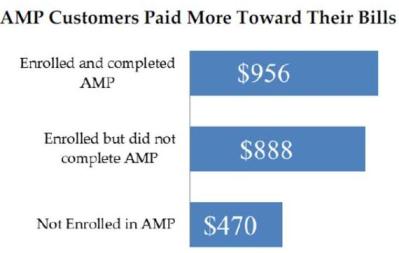