November 27, 2013 — A recent report by the AARP Policy Institute predicts that the 83 percent of seniors who heat with natural gas or electricity will see increased costs this winter. AARP projects that seniors using fuel oil may experience a slight decrease from last winter.

The cost of heating still varies greatly by fuel type and region. The highest costs remain for seniors in the New England area; however, AARP projects a slight decrease this winter (from $2,366 to $2,314). The next highest regions, where seniors face increased prices this year, are the Middle Atlantic, East North Central, and West North Central (see table below). To see the states making up those regions, see the map here.

While data shows that low-income seniors use less heating fuel than those with higher incomes, their financial burden is much higher. Approximately 30 percent of senior households have total incomes of less than $20,000. This demographic has the highest energy burden across the board, no matter what fuel type they use to heat their homes. The report includes a graph illustrating the differences in energy burden.

Finally, the report concludes with a table demonstrating that increases in heating costs has consistently outpaced the average LIHEAP grant since 2004. For example, the average LIHEAP assistance for recipients fell to $375 in 2012-2013 from its highest point of $502 in 2009-2010. In contrast, the average expenditure for heating only decreased from $914 to $844 during the same period. 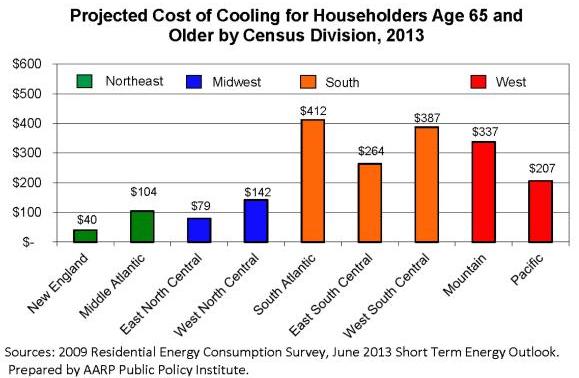