The National Association for State Community Services Programs’ (NASCSP) most recent survey of the 50 states and the District of Columbia shows about $950 million was available to the states and their respective local agencies to operate the Weatherization Assistance Program (WAP) in Program Year 2010. This represents an decrease of $232 million, or 19.5 percent, from the PY 2009 funding level of almost $1.2 billion.

A national network of states, local agencies, and private contractors used these funds to weatherize the homes of 143,192 low-income families, according to estimated production figures provided by the states.

Of the total, about  $176 million is from the  Department of Energy WAP allocation, with the remaining $782million leveraged from federal, state and private sources, or approximately $4.45 in federal and non-federal resources for every dollar invested by DOE. Leveraged funds come from two major sources: the U.S. Department of Health and Human Services (HHS) LIHEAP set-asides (states may use up to 25 percent of their LIHEAP block grant to fund weatherization-related activities) and 'other funds' from utility companies, states, and property owner contributions. (See chart below).

Forty-two states, the District of Columbia and one territory transferred an estimated $571 million LIHEAP funds into the WAP in PY 2010. This represented over half or 59.6 percent of of the total WAP funds available in 2010.

The 'other funds' category represented approximately $211 million or 22 percent of the total funds available for WAP in 2010. This category had been steadily increasing and reached a fifteen-year high in PY 2008 with over $400 million in funding from utilities, state general revenues, property owner contributions, and rehabilitation grants.  As in previous years, utility companies were the primary source of 'other funds', followed by the Regional Greenhouse Gas Initiative (RGGI), state general revenues and property owners. Funds from settlements from Petroleum Violation Escrow cases (PVE) have sharply declined over the past few years and are included now in the 'other funds' category. 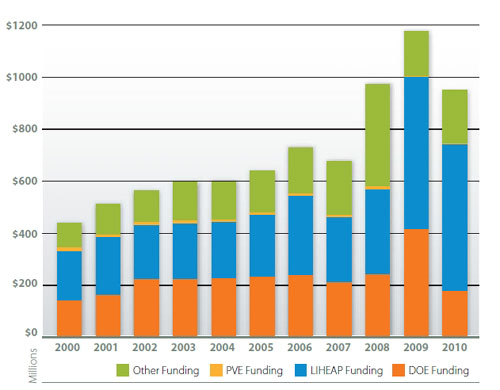